Maybe trying to draw conclusion so soon after finishing the row is a fool’s errand but that’s never stopped me doing things before and isn’t going start now! I’m sorry if this ends up being a little long but it will be my final blog entry for this particular adventure. I also want to quickly mention our sponsor, Chic Gites property rentals and announce a celebratory 20% off promotion for anyone quoting Atlantic20 when booking (all bookings except conference rentals). This offer applies to anyone so please feel free to forward/share. The site is www.accommodationcannes.com for anyone who fancies a week or two in sunny Cannes!

So for one last time, here goes…..

The human body is remarkable.
In hindsight we did an incredible amount of exercise during the 48 days of the row - 12 hours a day, almost no let up (a total of just 48 hours on the whole trip where we couldn’t row). The body takes about 3-4 days to adapt to the new regime and most of that is adapting to the sleep cycle rather than the workload. We were all in pretty good shape going into the row but hardly Olympic athletes. The rowing was more physical than I expected - no it wasn’t the intensity of a 2 hour row on the erg but it wasn’t very far off it either. At the end of a watch we were genuinely tired and 2 hours later we’d do it all again. But the body copes remarkably well. It quickly eats body fat and then muscles not being used (standing/walking/running muscles for example) to make up the calorie deficit. And on and on it goes. There were no injuries of note and any minor niggles soon sorted themselves out. Yes we all had some surface issues along the way (sore hands, bums, “privates”, chafing etc) but the main systems performed incredibly well all the way through the row and felt like they could have happily continued for far longer. The problem is that we so rarely make full use of this wonderful asset we all have. At a guess, most people would rarely push the body beyond about 40-45% of its capacity. It remains an untested asset for most, simply cruising along in 1st or 2nd gear. I would encourage everyone to use their bodies more and test yourselves physically - you’ll be amazed what your body can do for you and just how adaptive and resilient it is. 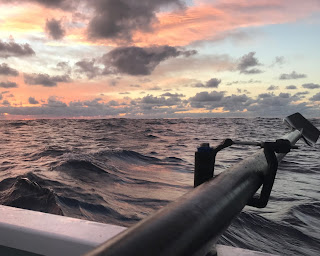 One of the many sunsets on board


It’s kind of depressing how quickly we return to normal life.
It’s just 15 days since we arrived in Cayenne and it already feels like a lifetime ago. I run into friends I haven’t seen for a while who start with “Congratulations!” and I genuinely have to stop and think what are they talking about exactly - “oh yes - the row!”. Running water, toilets that flush and flat beds have all become normal again and I only occasionally stop and think “thank god I don’t have to row again in 2 hours!”. Other than that, life has returned to normal again. Now some of that is comforting and some of it is a little depressing. We’re so accustomed to our creature comforts and daily routines that it gets harder and harder to step outside of normal life anymore. And even when we do, even for nearly 2 whole months, we immediately readapt and reintegrate so quickly. A lot of people have asked me “what’s next?” and although I have no plans at all at the moment (and certainly won’t be rowing another Ocean!) I know I will inevitably be drawn once more to pushing myself out of my comfort zone and reminding myself of how much we can achieve when we test ourselves. 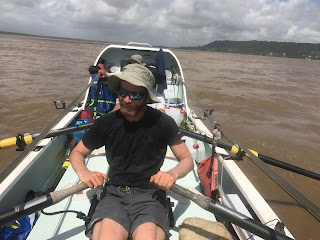 Arrival into Cayenne after 48 long days.

Adventures don’t have to be months or thousands of miles long.
There has been so much positivity from friends and family around our crossing. Many people have said they felt inspired to go out and do things (which is very rewarding to hear) but often people don’t know where to start and maybe end up doing nothing, quickly losing inspiration and returning to normal life. But adventures don’t have to be huge things. An English adventurer named Alastair Humphries came up with the concept, or at least catchy name, of “Micro-Adventures” - small, short and inexpensive adventures. For example, one weekend, go out saturday morning on your bike and don’t come home until Sunday evening. Or maybe take the whole family out, bring a tent and go for a hike that takes longer than a day. Or even just sleep in your garden one night with the kids. The point is, adventures can fit in with people’s busy lives and stretched budgets. It’s simply about stepping out of your daily routine, your comfort zone and spending time outside - alone or with friends or with children. You’ll be amazed how rewarding these micro adventures will feel and they may be the stepping stones to far bigger adventures in the future. The point is - get out there and do it! If you google “Micro Adventures” you’ll find loads of ideas to try.

A Legacy?
The World Record was not something that I or the other crew members every really thought about or talked about much. Yes, the 50 day target was something of a benchmark for us to measure our progress against and at times focussed the mind a little but a safe and happy crossing was all we were ever really interested in rather than breaking records. All that said, I have to admit it’s kind of nice/fun to now have a confirmed (by the Ocean Rowing Society, who will then inform Guinness) World Record to our names for the fastest mainland Europe to mainland S America crossing by rowing boat ever completed. Of course it will be beaten at some point in the future, probably sooner rather than later, but I can put up with being a “Former World Record Holder” for the rest of my life! But what we were all amazed by was how much the World Record Attempt captured the imagination of all of our friends and family. Most messages finished with something along the lines of “and make sure you break that record!” - who knew you were all such a competitive bunch!

The personal legacy for me and a large motivating factor for setting off, was the effect it would have on my two sons. Children being so adaptable, they barely noticed me being gone and pretty much instantly got used to me being back. But they are growing up believing things like rowing oceans are just normal. It’s brilliant - their father does things like that, their mother runs marathon (and soon far longer) distances, their cousin has climbed Everest a number of times and they know/have met people who cycle and run across whole continents, sail around the world etc. I love how wide their horizons now are - who knows what they’ll end up doing in the future themselves but right now for them, the sky is the limit.

One final legacy the row has left is the remarkable amount of money many of you have donated to Medecin Sans Frontiers - at the time of writing well over €5000. As readers of the blog from the start will remember, I was reluctant to ask people for sponsorship given the high chance of failure of our crossing (as well as Charity fatigue, tight personal budgets etc). But as the row went on more and more people were asking about sponsorship so finally with 1 week to go I grew more comfortable with the idea of raising money. Medecin Sans Frontiers is a charity I have supported for many years - I love what they do and how they do it. They simply pay for volunteer doctors and nurses to fly to war zones and try to treat all victims of war right there in the middle of war zones. Forget rowing oceans, these people are the real heroes. Their bravery and selflessness is an example to us all. And by donating money to this charity we can help these wonderful volunteers get to where they can do most good. It seems a small part to play in this remarkable effort but one they need to continue to operate. A huge thank you to everyone who donated so far and if anyone would still like to donate, the page is still open - https://www.justgiving.com/fundraising/niallbates

The Volunteers of MSF - the real heroes

Discovering, or remembering, what’s really important to you.
48 days at sea gives you a lot of time to think. Everything from guessing cloud shapes to solving world issues to new inventions to make millions to what adventure will be next. But by stripping your life back to such basics, the one thing that you really tend to focus on is what’s really important to you in life. Now this can be everything from the short term “what’s the thing you miss most from home” (bed) and what food do you most miss on the boat (steak), all the way to the more profound “what really matters to you in life”. The answer to this one for me was always the same - Family. I’m so lucky to have such a lovely little family and invariably take all of it for granted. It’s only when you’re separated and for such a long time that you really realise and start to appreciate what you have already right under your roof. I cannot tell you how much seeing Helen on the dock in Cayenne motivated me to keep going through the darker moments. Her importance to me is something that I have known from the day I met her but maybe I do still need occasional reminder. And although (as any parent will know) your kids can drive you mad (and already regularly have been since I’ve been back) I have to say I missed the boys far more than I expected on the crossing. The boys and I already have so much in common - a love of sport, travel and adventures - and I plan to enjoy as much of all three as possible with them in the rapidly disappearing time between now and when they set off on their own adventures as young men in just a few years’ time. 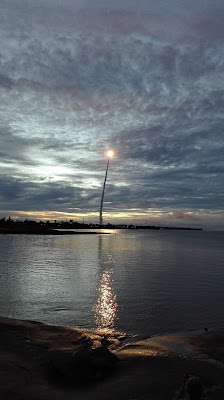