OK so I haven't won the Oscar yet....or been nominated....of even made the film really. But I do know that without the help of a number of people, that I could never even have tried to cross this Ocean. There are many things beyond our control that could prevent us succeeding - equipement failure, extreme weather conditions, serious illness, injury, etc. I don't like to dwell on such factors as these are beyond our control for now, but there is no doubt there are many things that could happen to prevent us achieving our aim of crossing. But the truth is, irrespective of the success or failure of this project, there are people I need to thank who have allowed me to get to the start line and at least attempt this feat, which I really do appreciate. This may not be the most interesting blog entry I will ever write but is one I feel I should. So in no particular order, here goes....

Helen - suppose she deserves a mention so may as well get it over with. The strain (emotional, physical, logistical etc) that this project puts directly on Helen means she had a veto on it from day 1. Most rational people might think twice about letting their partner set off to sea for 50 days simply to fulfil a somewhat strange ambition, and for a couple of years she did. Then, about 18 months ago, she gave the green light. Now I should perhaps be a little suspicious as to why she'd be so keen for me to head off on such a crazy expedition but maybe that's a topic for a whole other blog entry! But it takes a strong and very brave person to stand behind their partner on such a risky journey when the far easier thing would be to say no. And although I may take much of plaudits if we do manage the crossing, it will be far more worrying, lonely and scary for Helen sitting at home wondering about how we are doing, than it will be for me being out there and doing it. Although I'm sure Gin will help soften the blow, I do understand her sacrifices and do appreciate them. She has been as strong and as supportive as a rock throughout, and I have no doubt she will continue to be so all the way until we arrive French Guiana.

Standing behind and supporting Helen in the background, far from the limelight as usual, are her parents - Stan and Judy. No (wo)man is an island and Helen will depend heavily on support from them during the next 2 months. They will arrive in Cannes at the start of April and will stay until Helen and I return from French Guiana - anything from 3 to 6 weeks later. This is a huge commitment of time and energy, required simply because I chose to row an Ocean. It's a great example of the wide ranging implications such a project has on a wide range of people around me. But I know Helen, and I, appreciate their help.

Equally, in their own way, my parents are an integral part of the support team I am lucky enough to have around me. From their assistance in funding the row, to their commitment of time in March in Cannes to help Helen, they have backed me throughout. Although they probably think I'm crazy/selfish/mentally unstable to be attempting such a trip, they haven't (so far) tried to talk me out of going and that support is much appreciated. Hopefully logistics will allow them to come to French Guiana too to see my arrival - they would very much deserve to be part of the celebrations.

One final individual mention goes to Elin Haf Davies. A quite remarkable lady (though don't tell her I said that - she'll be unbearable!) who herself has crossed both the Atlantic and Indian Oceans by rowing boat. When the whole world shouted "DON'T", she was the lone voice saying "Do it!". Her unrelenting encouragement and practical support has been invaluable and much of the reason I've got as far as I have in this project. She's a true adventurer in actions and spirit and her enthusiasm for adventure is simply infectious.

And then of course there is the wider group of friends who in their own typical style have kept me entertained and grounded throughout - from planning who gets what of my belongings when I don't make it back, to reminding me of my past failed sporting projects (sub 3 hour marathon - I'm coming for you when I get back). And of course the photos of encouragement along the way (see picture of my boat below). Love you all guys! 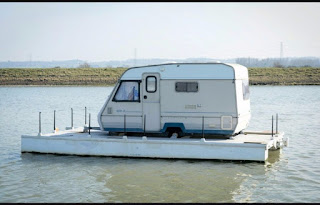 There's no doubt a venture such as this is fundamentally a selfish venture. This is my dream that I have imposed on others. Others will have to give their time and effort in order for me to do this, not to mention the emotional burden it imposes on everyone. But I do believe our boys will only benefit from growing up thinking things like this are "normal" and I look forward to seeing what adventures they persue in the future. It certainly is one of the benefits of the "fallout" I'm causing. That and there are worse midlife crises I could be having so it could be worse!