Having had decent conditions for the first 5 days the crew have now endured their first storm of the crossing.... seriously high winds (25 knts) and waves up to 6m. (Think your life is hard? Try going to the loo in a metal bucket on deck with 6m waves!!!)
This resulted in them having to abandon their rowing stations and hankering down in the cabins. For a while they were able to surf along with the wind towards the Canaries but then the sea state got too heavy and they dropped the para-anchor which not only halts their progress but is also there to stop the boat from rolling.
For those that don't know (myself included)  - this is an example of a para-anchor: 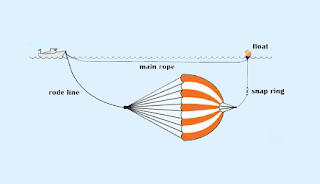 Quite a frustrating time for the lads but at least they could give their bodies a bit of a rest, even if sleep was difficult. This graphic gives an idea of the halt to their progress. 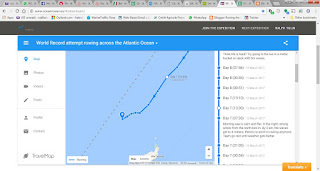 This lunchtime (Tues 14th  - 8 days since departure) they are back on the oars and heading ever closer to the Canaries and their 2nd waypoint of 20% of the crossing covered....


Friday 10th was quite a relaxing day, the sea state was calm and there was no cloud cover making it blistering hot.  It made it feel like a 2hour watch was much longer as the sun zapped the energy out of your body.

During the day we took some time to do a deck tidy and found a few flying fish had become residents on board rose.

We also decided to experiment with the watch rotations so that each person could at least once a week have a 6 hour off watch period.  This means that once an evening one of us has to row solo whilst the other 3 sleep.  Niall was the first to trial the process.  I then had the opportunity to row the 01:00 - 03:00 shift solo.  At first I was nervous but after 30 mins I put on my headphones and turned up the music.  The time then flew by along with the boat maintaining a 3.2knts single handed.  At points just watching the reflections on the oars can be mesmerising, along with the chainlinks in the ocean which are created during your recovery stroke from droplets hitting the sea water.


Saturday 11th started off with a beautiful sunrise making the clouds in the sky a fiery red.  At this point we had settled into the watch rotations and they were working well.

Once the watch had changed the off coming watch would make a meal by boiling water in the jet boil.  We always have hot water in flasks from the previous watch to prepare meals and we are just boiling more for the next watch.  The meal preparation and eating takes about 15 mins.

Then the tricky bit of making sure you have been to the loo (bucket or bottle) depending on what you needed.

Once complete it's off to the cabin to get approximately 1hr 20mins sleep.

This was all going perfectly until the 17:00-19:00 watch when we received a weather warning from multiple sources,  batten down the hatches was pretty much the summary from now until possibly Tuesday.  The wind speed started to pick up and the sea state changed from calm toBF3 in a matter of 30mins.  We went from wearing pants to foulies.

We were about to realise what a small boat in a large ocean really feels like!!

Despite everything we are still smiling and looking forward to getting through the next few days.  Niall was over the moon with the 9.8knts of boat speed.

Yesterday was bizarre - the quietest morning ever and the water was like glass but by 7pm we had 5m waves! We tried rowing on but gave up at 3am and let the wind and waves do all the work. We probably won't row at all today (Sunday) nor till Monday afternoon at the earliest, but we are going in the right direction so it's all good. It's really strange - like sailing with no sails! The cabins are a bit tight but better than getting soaked outside! Sparky (both I guess) - we did 9.5 knots yesterday!!