I'll never forget the day we finished our Pacific crossing back in 2012. Sailing into San Francisco on a cold April morning. Seeing land, vivid colours and "other people" for the first time in a month. Smelling food from the shore. Stepping on land, first beer etc. The senses get quite overwhelmed and the brain remembers every minute. Arriving into Cayenne on Sunday was equally memorable but really couldn't have been more different.

After the last shift on Saturday night (a fairly impressive 8.2 miles in 2 hours) Ralph came on board, looked at the mileage and said "No! We're going too fast". We had a quick chat in front of the plotter and realised we were being swept by the current way too quickly and were going to arrive at the river mouth just as the tide started coming out, making it impossible to row in. We risked being swept past Cayenne as we waited, making arrival impossible. And being night time we didn't dare risk landing on the shore nearby for fear of hidden rocks, reefs etc. So we made the decision to stop rowing overnight to hopefully slow down enough to reach Cayenne by late morning. We went to bed and slept badly with 2 squeezed into each bunk. By the time we woke at around 7am, land was looming large and the crystal clear Atlantic water had been replaced by muddy brown slop. We rowed past 2 islands off the coast and then through some extremely shallow waters to the deep shipping lane into Cayenne. The vivid green and red channel markers stood out brightly from the shore and soon we reached the river mouth which was just 7km from the marina. By now it was about 10:30am and the sun was noticeably hotter than anything we'd had so far but despite the heat and the lack of sleep, adrenaline kicked in and we rowed on at well over 4 knots. 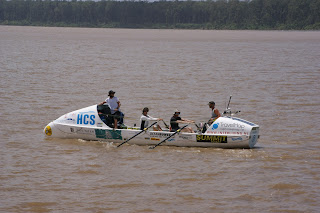 Soon we had the Marina in sight and despite the continuingly increasing temperature we rowed on. About 10 minutes out I started to feel a little dizzy so stopped briefly to take on some water and sugar. We approached the marina and could hear and see our little welcome possie of my parents and Helen, Clara (Clem's girlfriend) and 3 past and future local ocean rowers who came out to meet us. There was some confusion over where exactly we should land which resulted in us overshooting and having to turn around and row hard against the incoming tide - just what we all needed. I was now so light headed and dehydrated that I genuinely wasn't sure if I would make it, but we did. We landed and managed to secure the boat in a fast moving tide. We took a moment to gather our breaths and thoughts then the celebrations began. We shared a big team hug then stepped ashore for the party to begin. It was so so nice to finally see Helen and we shared a long hug - this was mainly so she could hold me upright in truth! 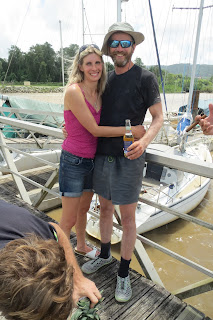 The welcome team had done a great job - cold cokes to get the blood sugar up followed by cold beer, champagne, fresh fruit, cakes etc. Helen had the scales to hand to weigh everyone off the boat. I was 67kg which represented 15kg of weight loss! I hadn't weighed 67kg since I was in school! Most of the others lost 6-8kg - the debate goes on as to why I lost so much more (I like to think because I worked that much harder - they like to think because I was heaviest so had most to lose)! I remained fairly light headed for the next hour or so and had a bad case of sea legs too. Within about 20 minutes most of the rowers had to sit down to continue the recovery. But the party continued on the pontoon. Happiness, relief, excitement - it was all there really.

By the afternoon we headed into Cayenne to have our first showers, put on some fresh clothes and head out for an early dinner. We had a lovely evening with family and friends and the wonderful local ocean rowers who had showed up to celebrate, take care of us and give us a wonderful welcome to French Guiana. It was a lovely evening and first day back on land. The relief that the rowing was over was incredible. 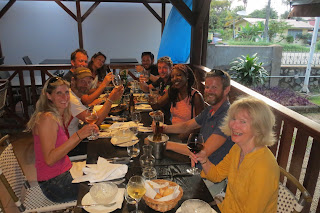 The clock stopped at 48 days and 5 hours - a full 2 days and 5 hours inside the current World Record. Though the motivation for us was rarely the record (just a safe and relatively speedy crossing), it was a nice feeling knowing we'd got that too.  No doubt the record will be beaten in the future but I can handle being a "former world record holder" for the rest of my life!

Since arriving we've adapted pretty quickly back to normal life. Apart from some aching fingers and sore lower backs if we walk more than about 500m (muscles we simply didn't use on board) we're actually feeling ok. I still appreciate a flat, soft bed but have already started taking water on tap and flushing toilets for granted - amazing how fast we slip back into normal routine.

In the coming days/weeks I'll try to reflect on the journey overall - it still feels too soon to take it all in - and will blog any conclusions I can come to. In the meantime I'd like to thank you all for your support by messages, support for Helen while I was away and your very generous donations to MSF - a very worthy charity to benefit from our toils. In case anyone would still like to donate, here is the link: https://www.justgiving.com/fundraising/niallbates

I look forward to catching up with you all in the coming weeks and months.
Posted by Niall at 01:17