5/6 of the row complete - ETA whipping around a bit  - will it be Sunday, will it be Monday, or later?! Less than 500 nautical miles to go and updates below from Niall and Ralph.

Keep the support and messages coming - this last week is when they'll really have to dig deep and overcome all their aches, pains and exhaustion as they close in on the finish line !!!

For me I am about to book flights  - yippeee

A blog from Niall:

"It was the best of times, it was the worst of times" is the opening line to something famous - A Christmas Carol? Hard Times? Anyway, the best and worst of times on board here is without a doubt the "10 minutes" shout that goes out at 10mins before watch changeover. For the on-watch: ecstasy - the watch is nearly over. For the off-watch: despair - time to wake up, get ready, your 2 hours on the oars is about to begin. For 3 of us (Ralph, Clem and I) this has gone a whole level further - the "ghost" shout. It started about a week into the row when someone, we're not sure who, arrived on deck about 40mins early for watch one night. The on-watch looked blankly - "what's up?""Nothing - was just in a deep sleep when the shout woke me". "There wasn't a shout mate - you must have dreamt it"A slightly confused look, a giggle for the on-watch and nothing more thought of it. But this pattern began repeating itself over and over for the three of us. From seeing the cabin light click on an hour early "you dreamt it mate, go back to sleep". click - light off. To people arriving fully ready to row before sheepishly returning to bed. And it didn't end there - I hold the current record of doing it 3 times in one off-watch period! And perhaps most remarkably of all was Clem and Ralph doing it at exactly the same time in opposite ends of the boat - "Go back to sleep Clem". Click. "You too Ralph". Click. In the past couple of weeks Ralph and Clem who wear watches have limited the public humiliation by checking the time before going on deck. But if you watch carefully you'll see the cabin light flicking on then quickly off mid watch, or hear vague mutterings from a cabin as they get undressed again to go back to sleep. The other night I woke and started to prepare I heard "it's only half past Niall, go back to sleep". I rolled over, went back to sleep and half an hour later got myself on to deck. As Ralph arrived on to deck he whispered to me "When I heard them telling you there was half an hour to go I took my shoes back off and went back to sleep!". Insanity? A healthy respect for watch changeover? I'll let you decide. And what of our 4th member, Colin? He has not been affected given he sleeps slightly deeper than the dead. He gets woken for the first time at a quarter too, again at 10 to and then nagged continuously from 5mins out. That way he might only be a couple of minutes late on deck. From one extreme to the other! 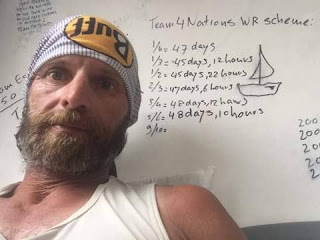 With a lot of hard work we will arrive in Cayenne!We are 40 days at sea and we have just completed the 5/6th mark of the crossing, which means a little under 500 nautical miles to go! For the first time since the 1/3 rd mark we gained time on the record schedule! (2 full hours

With a sleek rowing regime we are finally back in the daily distances of 70 miles and we expect to arrive next weekend with a new world record in Cayenne.- [] We are all in good spirit apart from all parts of our body which are longing for a rowing-free and salt-free environment. About the other rowers, I can only report (anonymously) that one of them is rowing on an air bag since week nr. 2, another had to cut his suppurating sores on his ass in order to continue rowing, and I have some saltwater sores and abrasions for which I need five layers on my rowing bench, a bright red & sore groin and scrotum (diaper rash is peanuts compared to it) and as an added bonus: a red swollen penis filled with white-yellow pustules and that flaking skin that makes this sport so amazingly popular! Fortunately, I know from experience, that a good shower and clean clothes on land will return everything back to normal after only 24 hours!