Into the last quarter and the charity blog

Firstly an update from those amazing boys in a boat. The 75% marker was passed on day 36 but some unfavourable currents have meant progress has been slow. The world record target is still achievable but it looks like it will be touch and go. Come what may land creeps ever closer so keep crossing your fingers, praying, rubbing beads, picking four leaf clovers, or anything else you can think of....

From Niall - Day 36
Yet another slow day - winds picking up as predicted but currents and sea state difficult. Best guess now 49/51. Auto helm under more pressure though due to waves so I fear we haven't seen the last of that issue yet. miles do thankfully continue to drop (820 now) but starting to feel like the neverending story.

day 37
5 weeks underway and the arrival in Cayenne is approaching. I chose French Guiana as our point of arrival being the most stable country in South America. That changed a bit last week, when, for the first time in 50 years, riots and demonstrations broke out. The rocket launch where we hoped for the 25th is postponed and planes were grounded. Fortunately it seems to stabilize again.
The world record retrieval is still very exciting. The firm believe in our 45 days schedule has gone. Currently we are already a week into a "disaster area" with varying currents restricting our daily distances which has thrown us back to an expected arrival time of 48 days and 12 hours with a quarter (800 miles) of the total route to go. Less than two days ahead of the current world record of 50 days, 10 hours and 36 minutes of team essence! We continue to fight to the last mile!

Day 37- From Niall
Much better day - changed shifts at lunch so now rowing with Ralph which is always entertaining. Swapped cabins for a week so back in the small noisy one but no drama. but as soon as Ralph and i started rowing currents turned and past 6 hours have been over a knot faster. Frustrating as nothing we can do about it either way and no idea how long will last but enjoying it while we can. It makes predicting an arrival date near impossible for now though...

Many of you have asked if Niall is doing this crazy escapade for charity... and if not why not?

Well before he left and up until now he wasn't and the 'why not' was as follows:

A number of people have asked about a charity page/donations but due to the relatively high chance of failure of the crossing I am not comfortable asking people to give their hard earned money away when we might well fail in our goal of reaching French Guiana. Of course we'll give it everything to succeed but weather and vital onboard equipement are variables beyond our control.


But now we/they are well into the last quarter of the row and every day they get a day closer to the finish line and us to having a husband and daddy back! The chances of them finishing and potentially breaking that world record are better every day.

If you would like to sponsor Niall, the team, the shore team (!), please feel free to visit the following justgiving page where you can donate to his chosen charity of Medecins Sans Frontieres. With the current global situation this seemed a fairly pertinent choice. 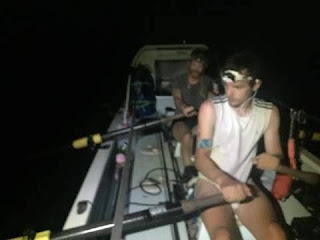 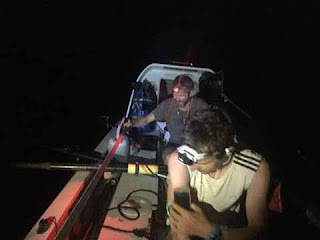 Many thanks for every donation, all your words of encouragement and all of your support!